It’s that time of year again. Another CCM down. This time a few of the boys and I drove/rode to Houston to gather for CCM 15. The cool part this time was that we got to stay with big brother Vinson in his Houston diggs for the weekend. We tried to keep it nice and clean…. besides breaking his garage door and having Joseph pass out within the first few minutes. My non consumption of alcohol led me to be the first one to fall asleep and luckily not be held responsible for these travesties .   This weekend marked my first big trip on my motorcycle (900+ miles in 3 days total) and I found out a lot of things about motorcycle riding including the frequent need for rest stops. On one of these such rest stops we even met a guy on the outskirts of Houston who turned out to be quite the character. After first rolling up in his 5.0 soft top he made Thaison and I stay there so he could go home and get his older Celica. We didn’t think much of it until he returned in a purple older gen celica (Thaison help me out here) which was completely gutted and swapped with a 4runner motor. Needless to say the car looked like a lot of fun, and the owner had tons of fun doing the only thing you’re required to do in rural America…. burnouts. Shortly, we made it down and stopped at Mai’s restaurant in down town Houston. Little did we know the place was all kinds of fancy and we were all under dressed ( me in a motorcycle jacket and Thaison’s ripped shorts didn’t help our case). The food however was great and we sure did eat it all. We left there and made it to Vinson’s house to get ready for the next day.

We woke up bright and early the next day to head to the show. The venue this time was at a restaurant called Papa’s on the Lake, and boy was it pretty. The view was great, consisting of the lake and everything around us. It was a smaller venue but there sure were some great cars that showed up this time. The Natsukashi garage boys had roll in at 10 but got there around 10:30. Props to Ty and Tiff for the roll in scheduling, it was MUCH less hectic.

Thaison chillin with his new Levin

Charlie made the trip with us, and boy did he have fun

An 86 morning. Thaison and Jonas rocking the show. These two builds are great and I suggest checking them out. 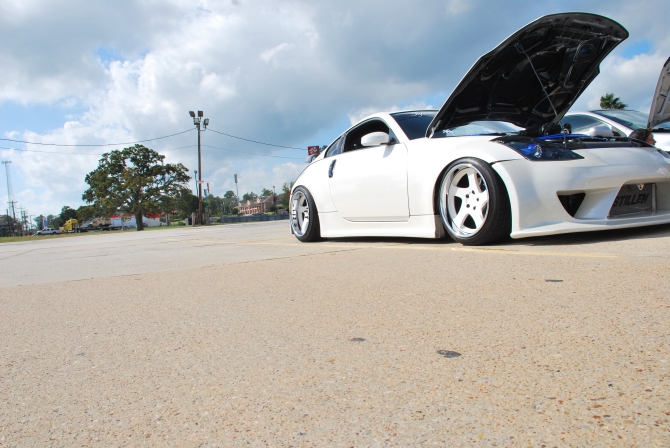 Now this Z was one of the first cars there that we also saw on the highway. He is supercharged and all sorts of low. The owner was a really chill guy who knew his stuff and was a pleasure to talk to (I apologize for forgetting your name) Props to him for getting his bumper on for the show

Our good friend David Ngo stopped by as well to help his JDM freshness boys out. It’s always good to hang out with David. He has a great attitude about everything and is a pleasure to have at any event

We all decided to live it large this weekend but none of us as much as Charlie. He stayed sippin’

I saw this RSX at Wekfest and was still excited to see it again. I really liked the wheels, and I’m normally not a fan of bling.

Jonas also went home later to get the rotary Levin. This thing shoots flames like no ones business. 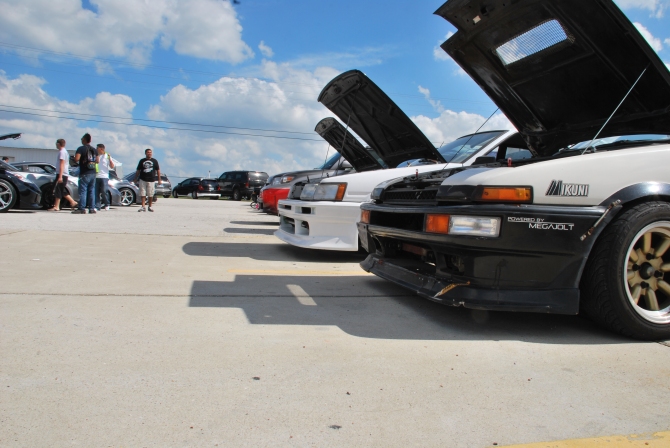 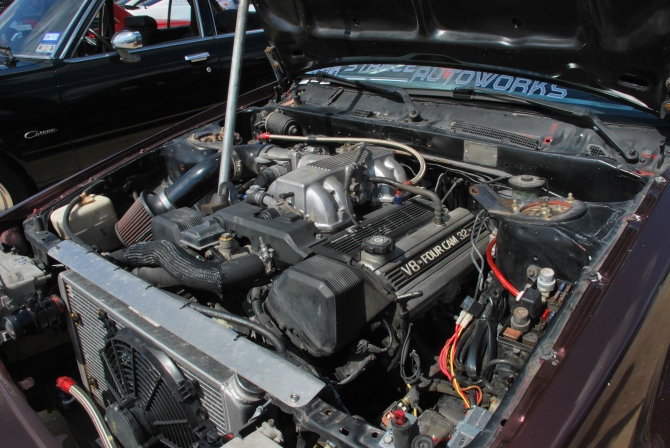 Brad brought out his 86 with this 1UZ swap. v8’s in light cars are awesome!

I’m not quite sure what wheels these are, nor the size, but it all flows together with the feel of the car. Car’s with a history always mean a lot to me. 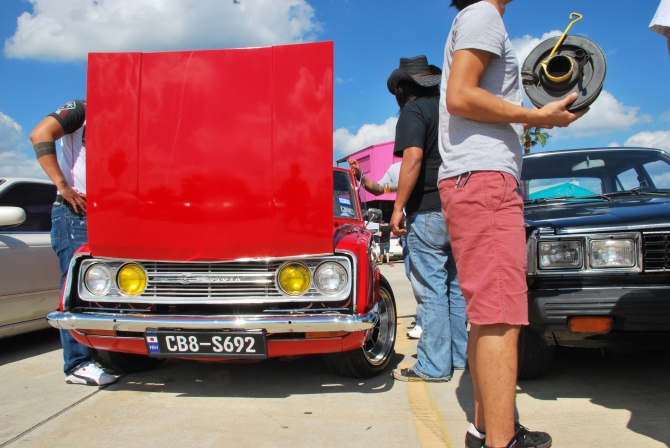 The other Toyota Corona, in coupe form. I’m not normally a fan on the yellow lights but this car pulls it off well. It was so clean and yet I failed to get another shot. Again, Hayashi streets 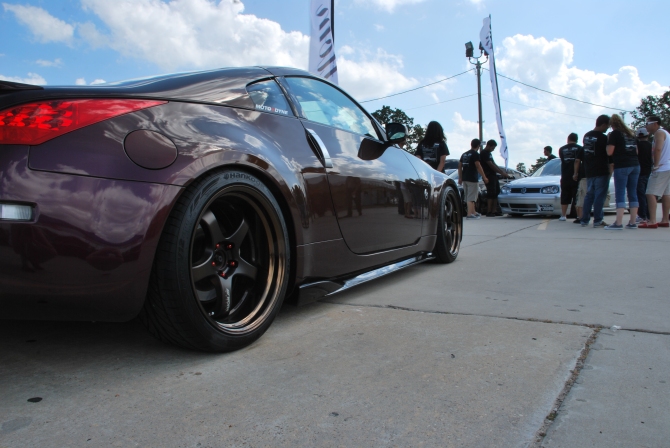 Root beer colored meistes s1’s. It’s hard to stand out in Texas with the Z scene here, but little things like this does just that.

I got to talk to the owner of this car. He was super chill and took great pride in his car. It’s not everyday that people mod elements and when one is done right you really have to stop and appreciate it. This one had all the right little touches from the TE-37’s to the…… do you spot it? Yeah it’s boosted. I forgot the exact numbers but it was something that sounded like a blast to drive. Props 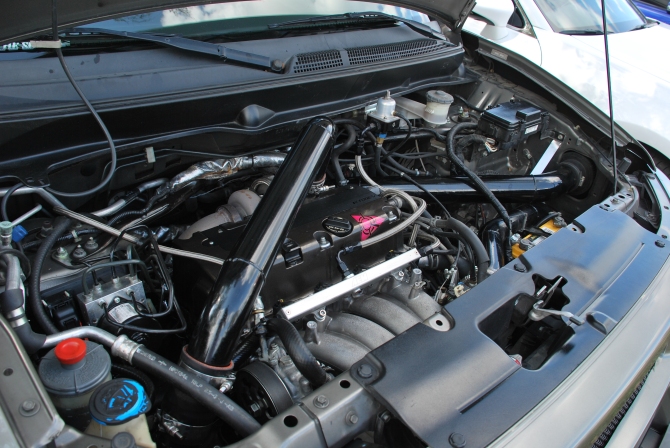 The money shot. As you can see Mayday Garage had also liked this car. As I remember reading these stickers were given to only a handful of cars that the guys really liked at one meet or another. It’s quality if Mayday appreciates it, I promise.

I title this… ‘Merica. This car might have been the most custom automobile there that day. Everything from the air ride suspension to the one off interior made this car amazing in all aspects. 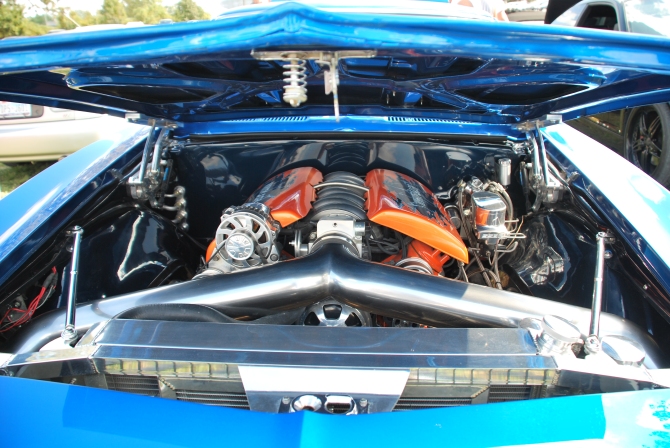 And that’s what Joseph was staring at 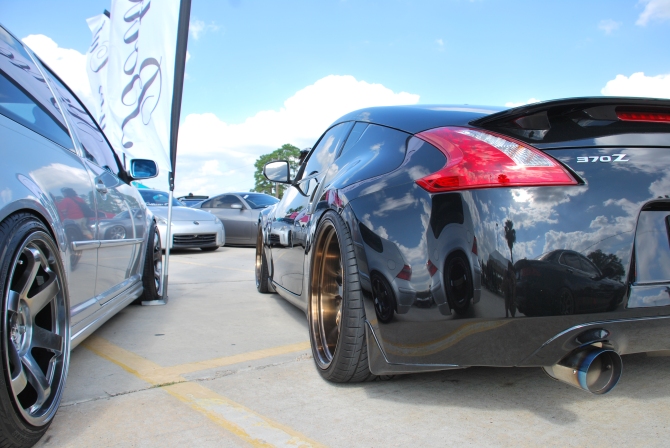 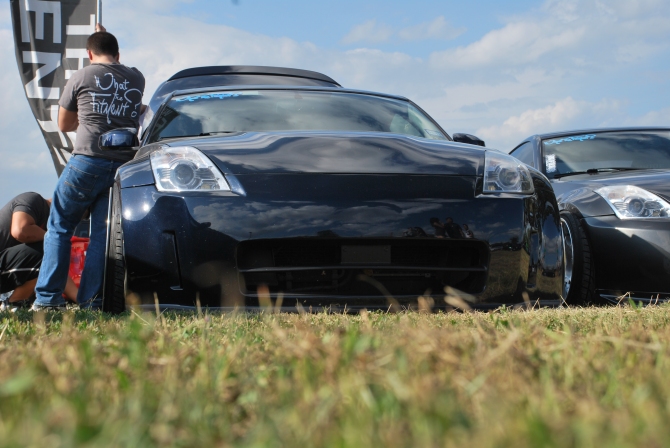 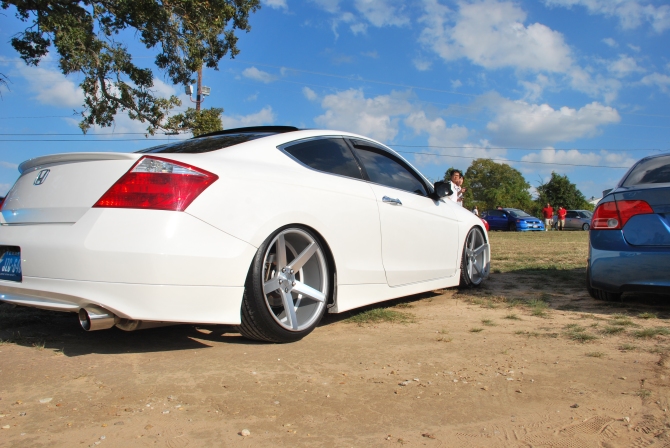 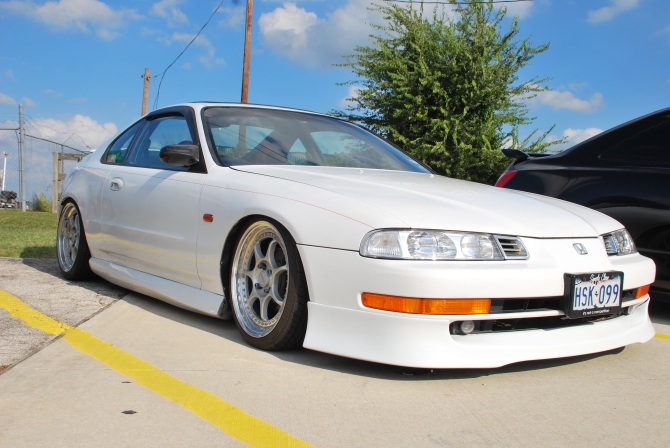 Charlies favourite car there. This car is amazing in every way. It is so period specific  with the blitz wheels to the aero 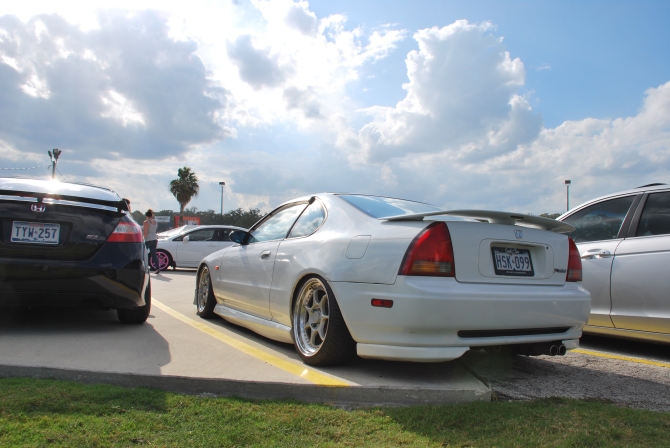 My favorite shot of the day

NSX-R. I never thought I would ever see one in real life but I did. My life is complete. This car was A+ in every way possible. 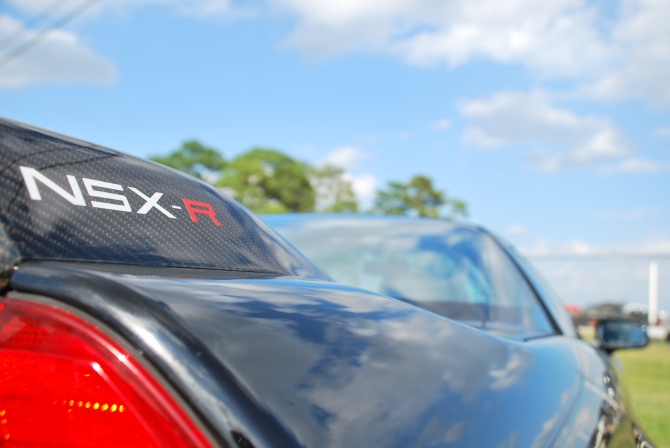 So much money in one place….

Tons of people showed up

Jonas also has a rotary powered levin! Right next to Thaison’s levin coupe. I love all of Jonas’s creations. The exhaust on this car is made of a motorcycle exhaust and some awesome welding skills.

This would be Kasper’s EG. I got to talk to him for a while and really learn about this car. It was built extremely well, everything from the motor to the suspension was all done. This was hands down one of my favorite cars there. Did you notice the retrofitted headlights? the TE-37v’s? Oh yeah, it’s also gutted and all that race jazz. 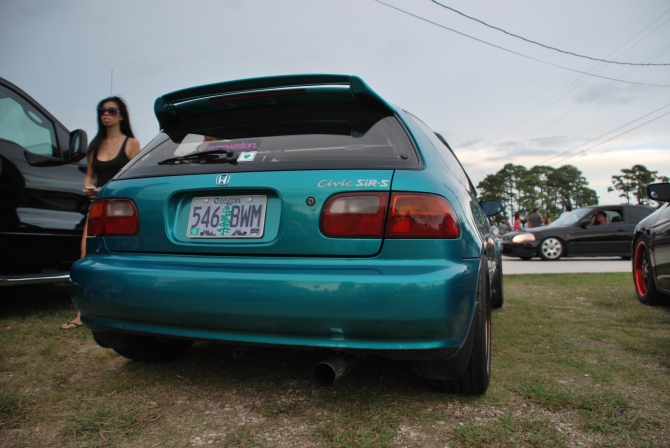 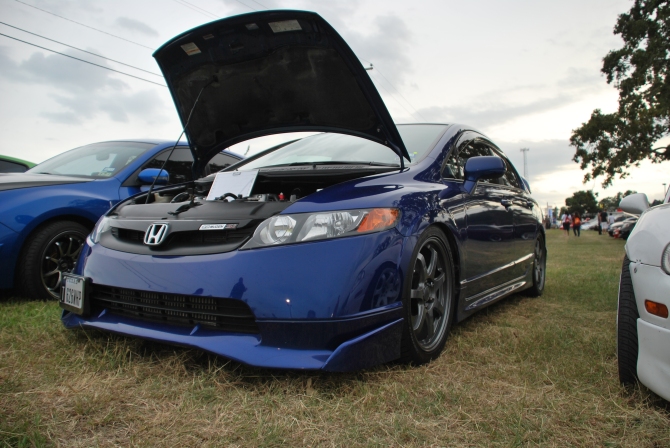 This happens to be another of my favorites there. Headlights, wheels, thin side moldings, all the finer things in life. 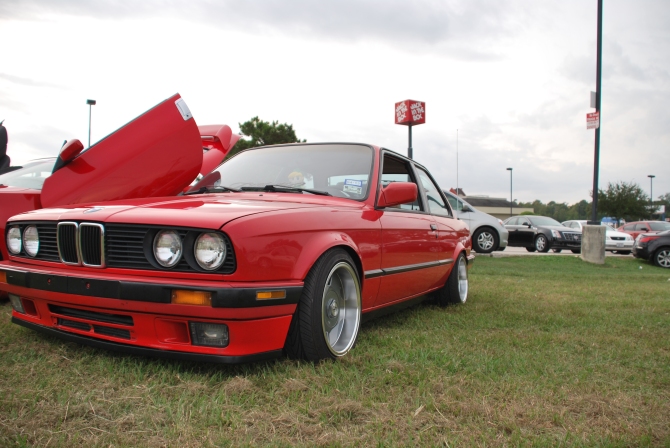 Gotta get my motorcycle fix on. I’m still debating between this and an r6 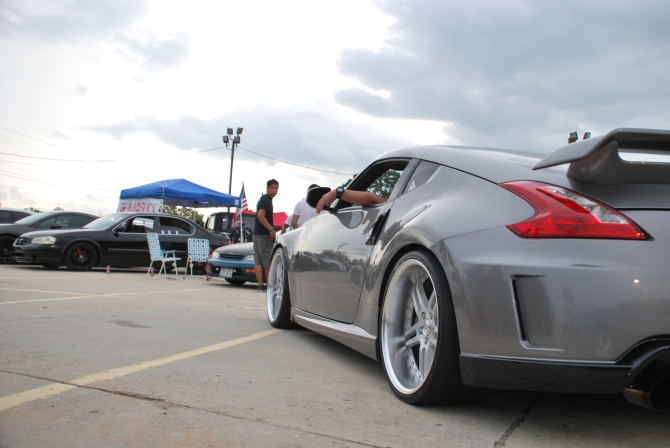 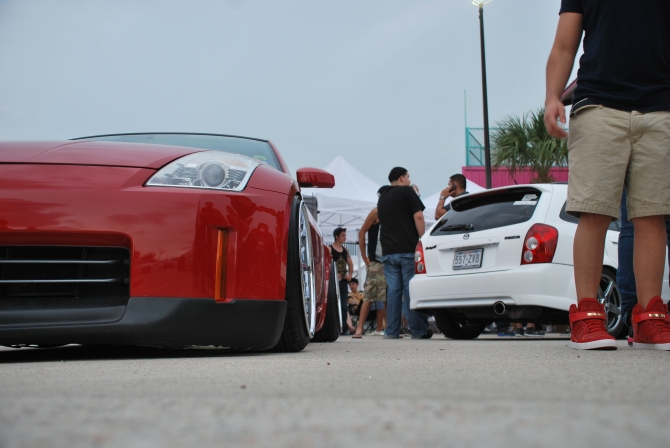 I don’t know how he’s gonna see with that stuff on his visor!

So after a long and busy day at CCM15 we decided to go eat with the boys. We first went searching for dinner spots behind our leader of Houston, Jonas. After finding out Moontower inn was closed down Jonas took us to a little Mexican joint down the road. This Mexican food was ridiculously good and really filled us up. I can’t seem to recall this obscure Mexican restaurant’s name since it put me in a serious food coma and was located in some shady part of town where they don’t believe in street lights, but the best part was that is was open 24 hours a day. This sure beats IHOP at 3 AM let me tell you.

That’s all we got for CCM15. After the long Journey from Austin to Houston on my motorcycle it felt good to get back home…. through the rain…. and traffic stops. All in all it was a great trip that I really needed and am thankful for everyone that spent the weekend with me.