My last post, I went to North Carolina to pick up a 4age motor that I could plop in while the other spare motor is in the machine shop. 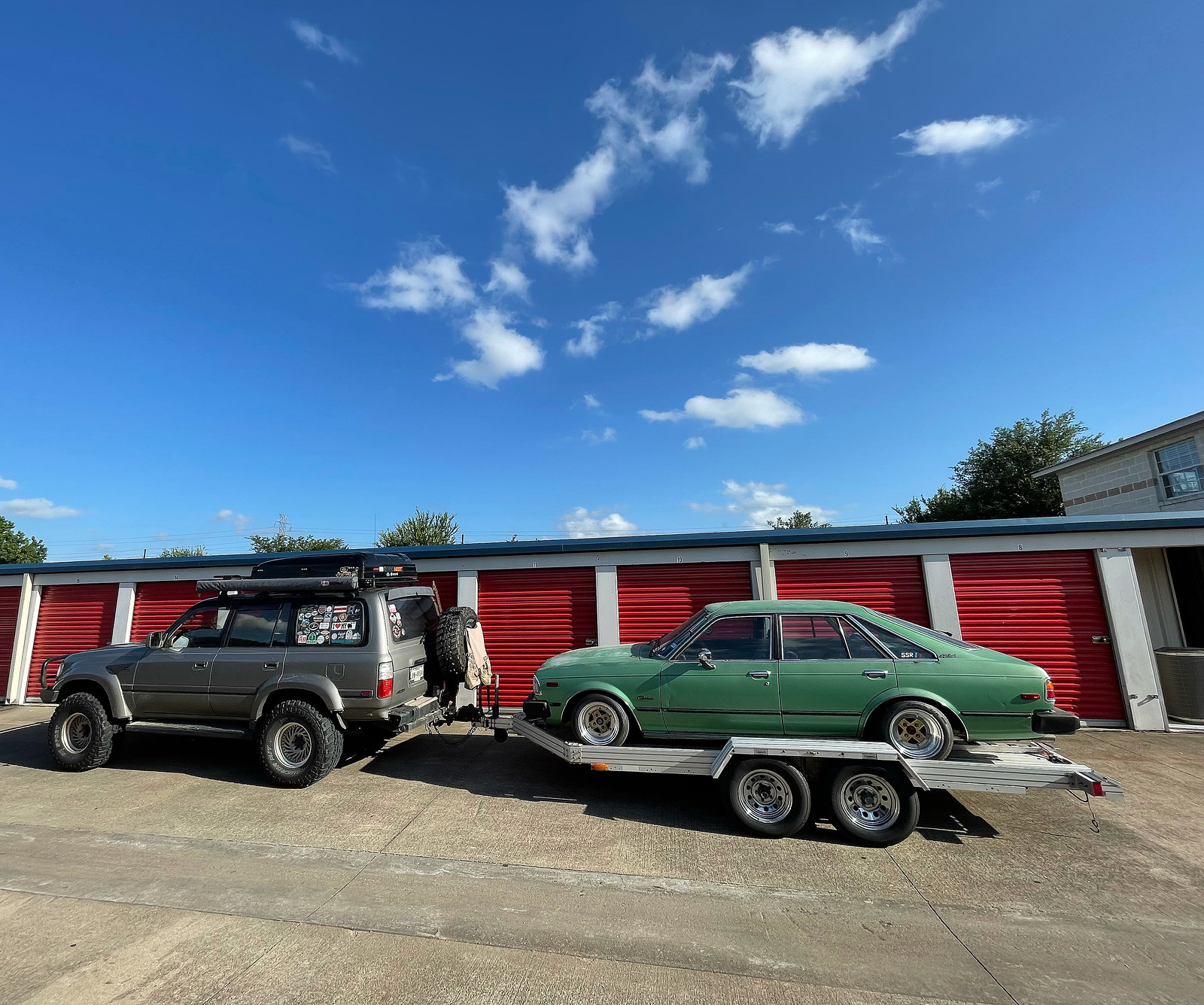 On my days off, and after work I started to swap parts from the blown motor to the motor I picked up. I worked on the motor little bits at a time. The Texas heat is starting to really get hot and didn’t want to get dehydrated. 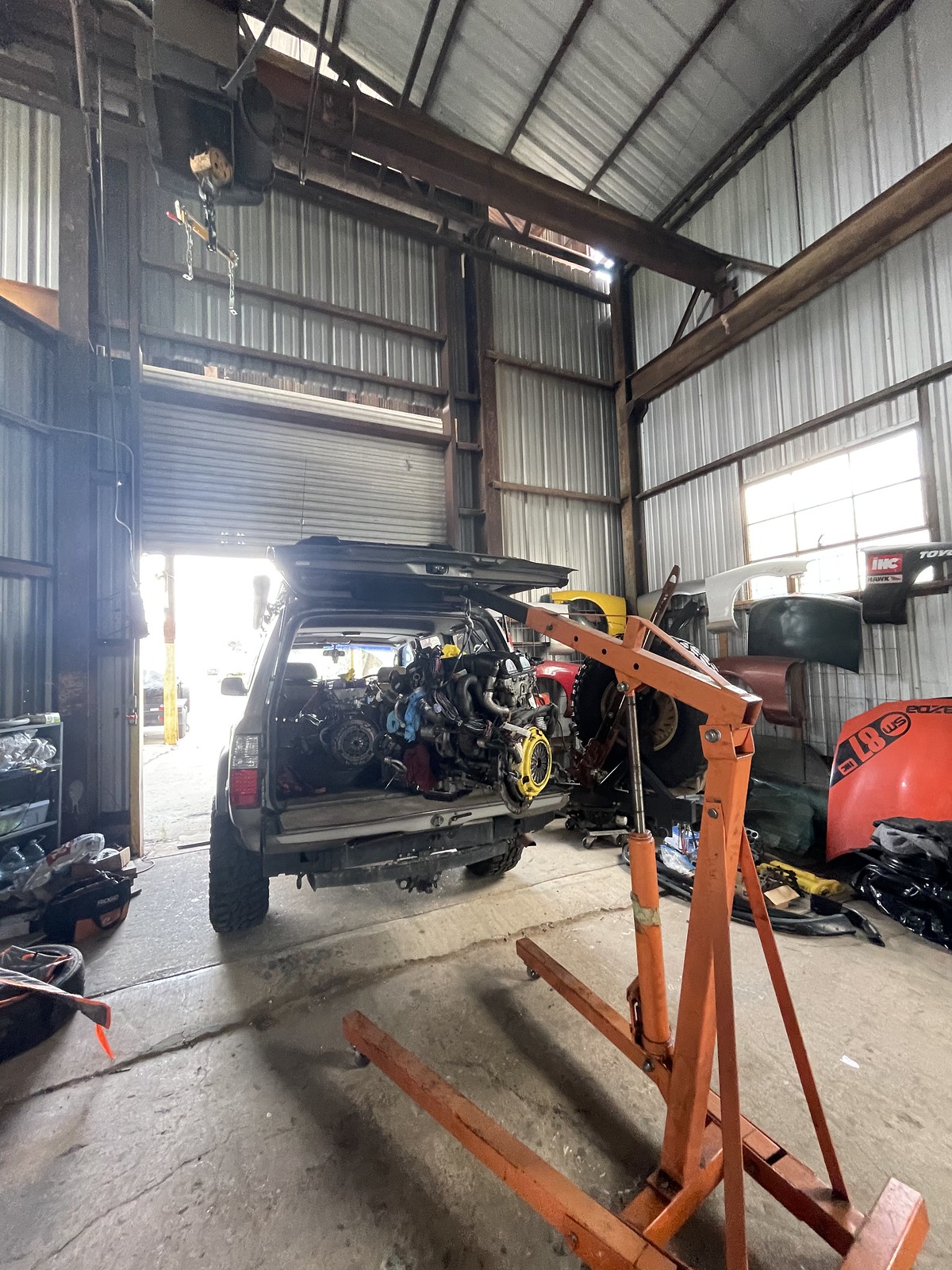 I’m more mechanically inclined now then when I first started this project 3 years ago. I learned form past mistakes and working on getting my motor in the AE86 wasn’t too hard the 2nd time around. 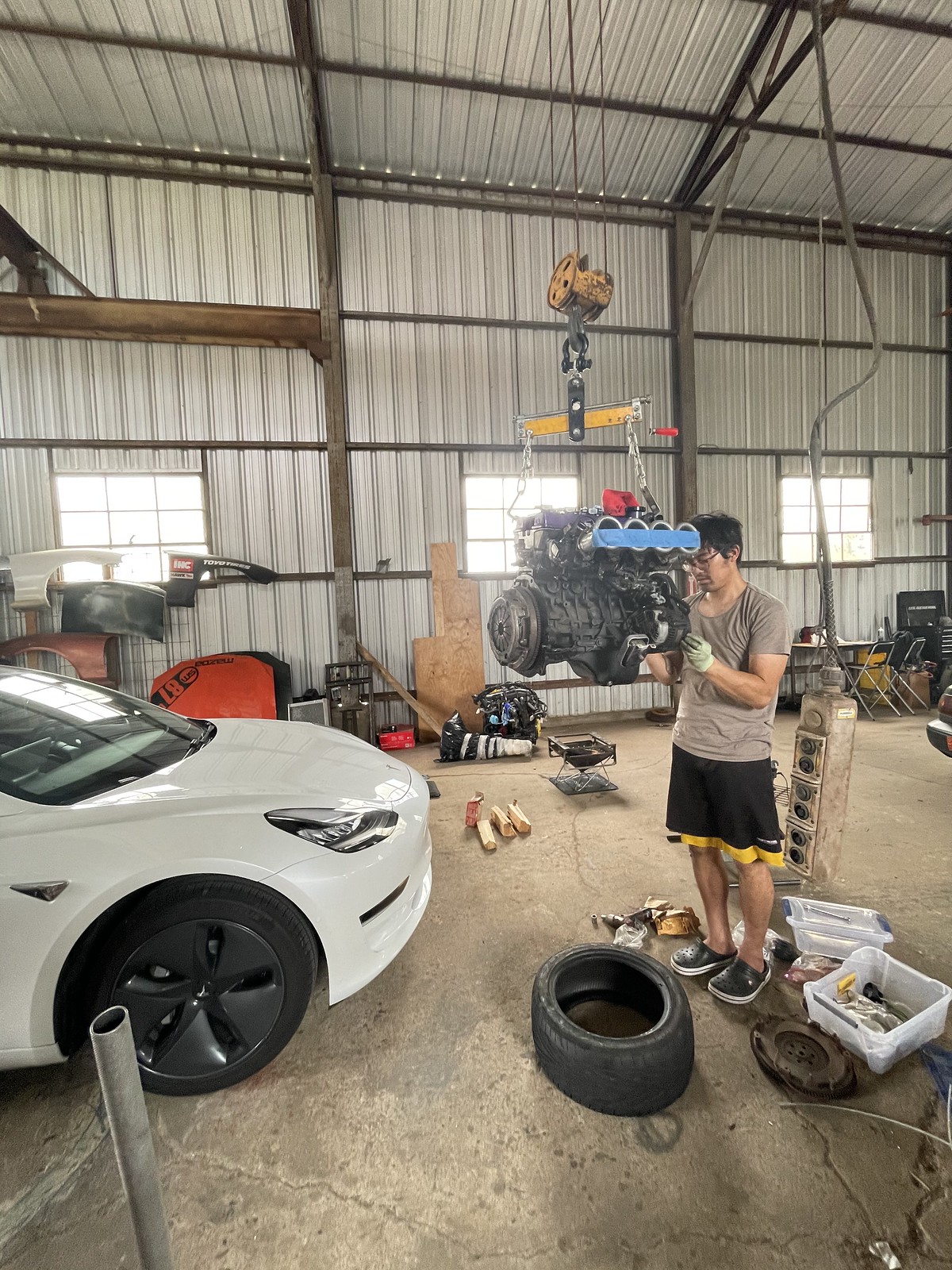 Thankfully no hiccups and everything went in smoothly. I plugged the engine harness connections and I called it day. Next on the list is to bolt in the exhaust system, then add oil. Hopefully Ill be able to crank her up. 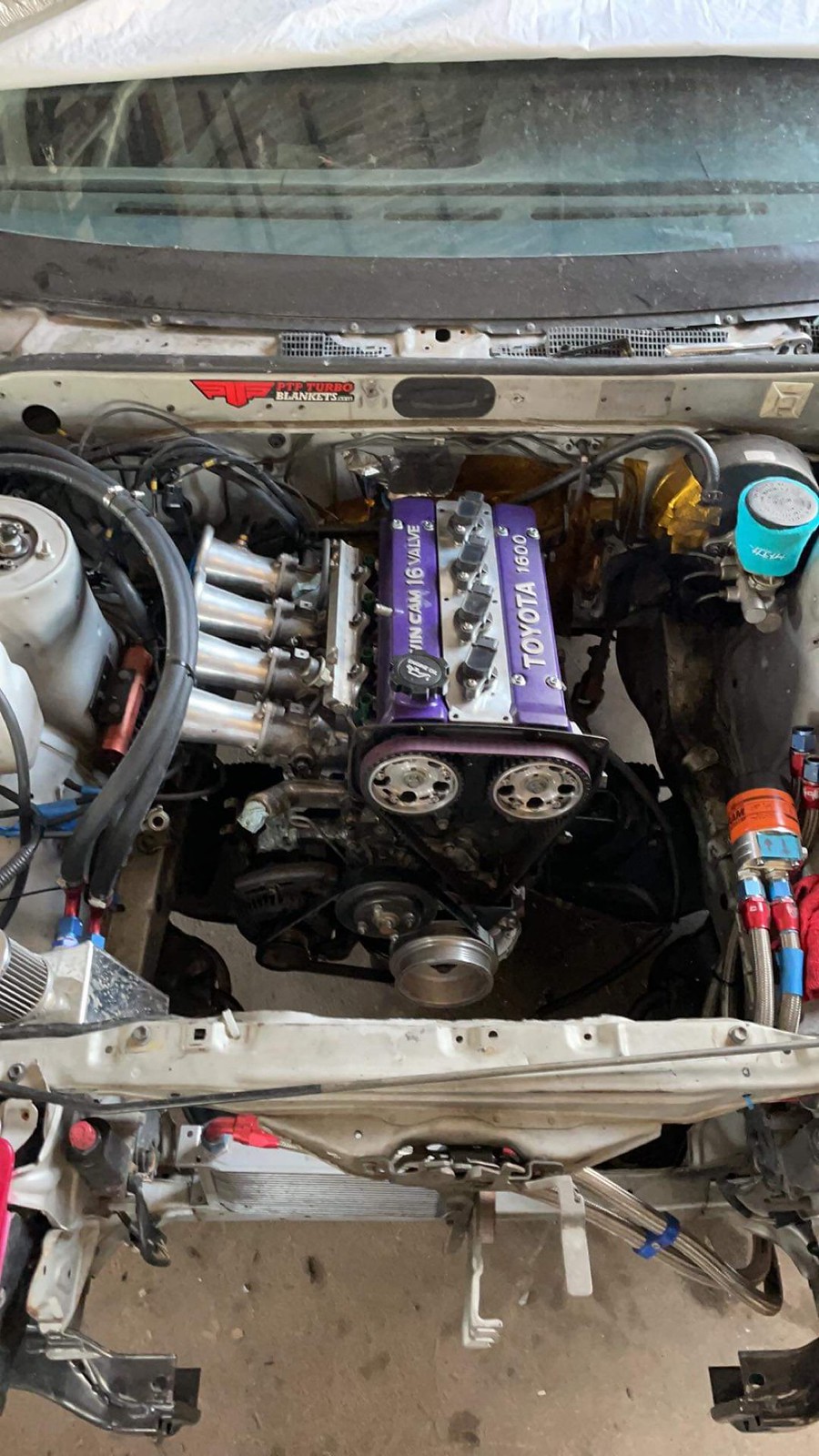 If she runs, then thats one big step close to making my race in July. Stay tuned for more updates!

Last weekend I did a last minute road trip to North Carolina. What sparked for this last minute trip, was missing my race at Hallet that weekend. Unfortunately the motor that I tore down is still at the machine shop, and wasn’t going to be able to make it in time. With uncertainty of delays, I might miss my race at Circuit of the Americas in July. But I didn’t want to risk that, and lose positions of the general season. First step in wining a race is to complete a race. If my car is down, Im just going to my position since I’m not getting any points.

That’s when I started looking for running 4age motors, and unfortunately its slim pickings. The motor is over 30 yrs old and some people asking ridiculous amount of money for them. I did see some reasonably priced 4age 16V motors, but couple got sold before I could buy them. That was my fault since I took too long to respond back. I checked another motor, but wasn’t looking fresh visually. The motor spins, but its hard to turn by hand, kinda worried I would have to rebuild it.

In the AE86 group chat, one my friends ,Rick, pulled his 4age motor to put a beams swap in, but ended up wanting to go back to 4age 16v. I randomly messaged Rick if he wanted to sell his 4age. He gave me an offer I couldn’t refuse. The problem was he lives in North Carolina, and I’m in Texas. The motor was a good deal with all the goodies it has, but averaging 12mpg in the Land Cruiser means gas would make it expensive. 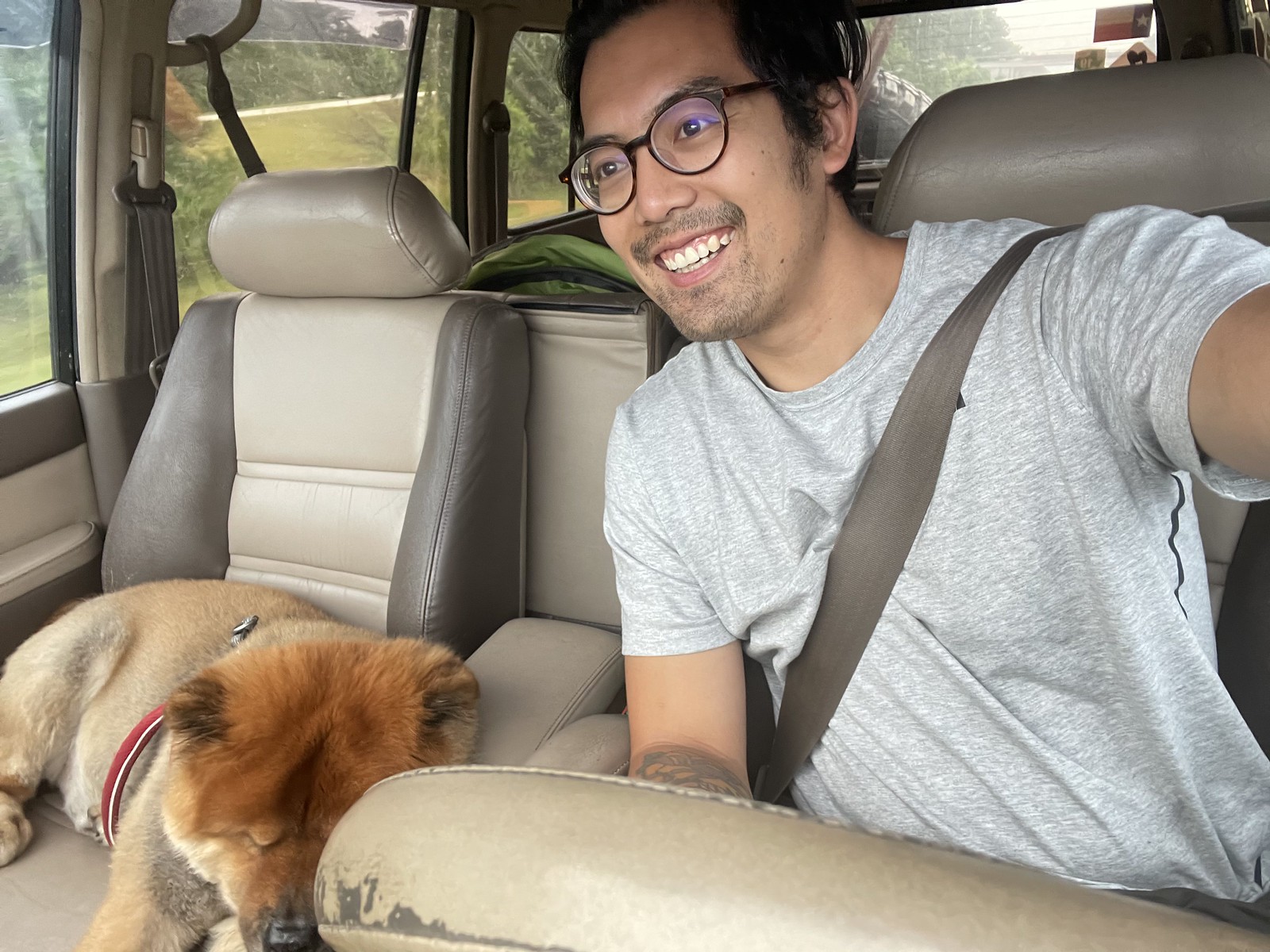 I did some quick maths on how much gas I would possibly spend on the trip, and it still turned out to be cheaper, then buying a 4age closer to me and getting it rebuilt. At least this motor is drop in ready. Luckily it just so happened that I would be off 7 days on my race weekend. This was only time in my busy work schedule that I would have that many days off. I took it as a sign, and I loaded up the Land Cruiser and took Lambo along. 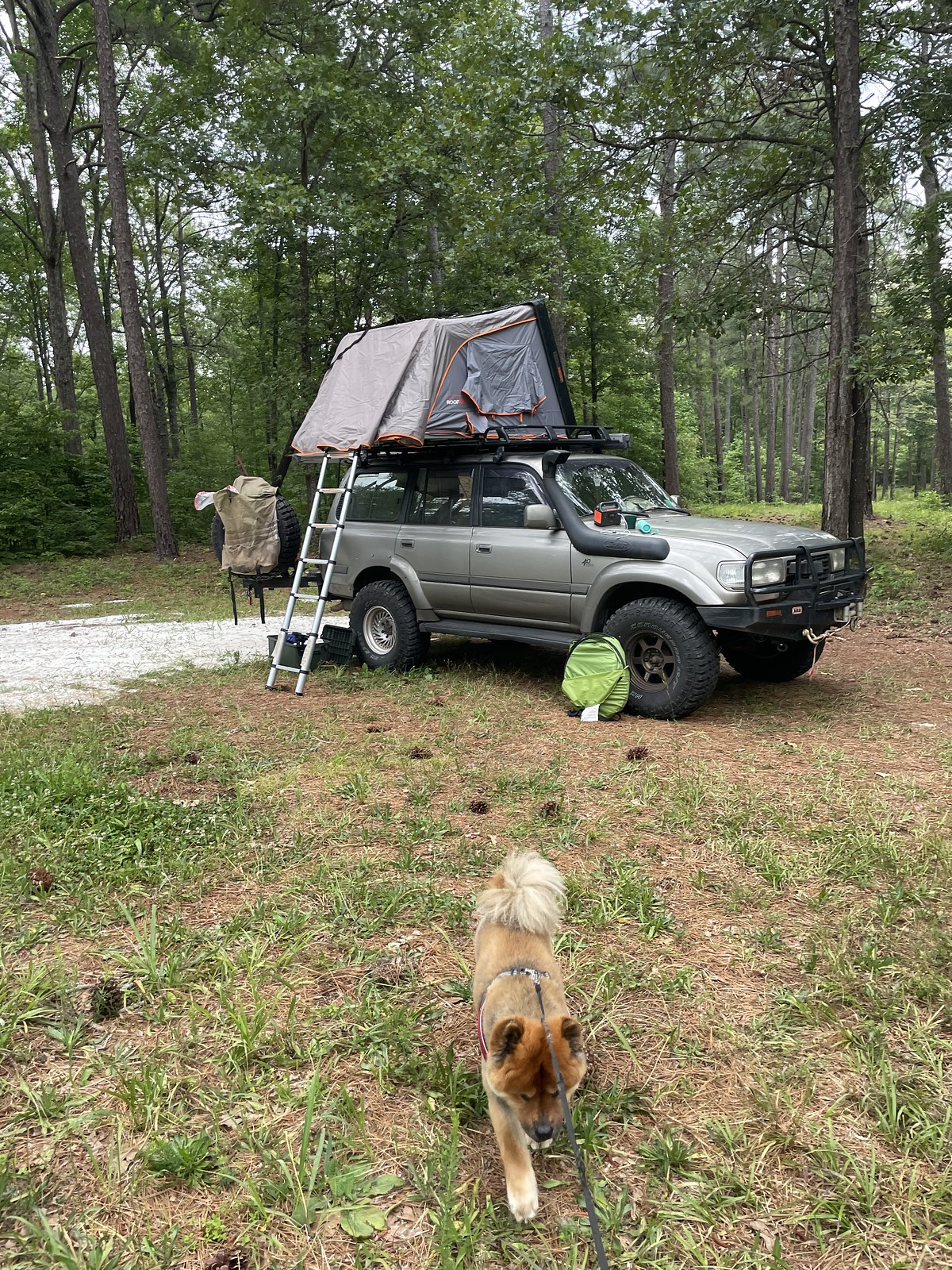 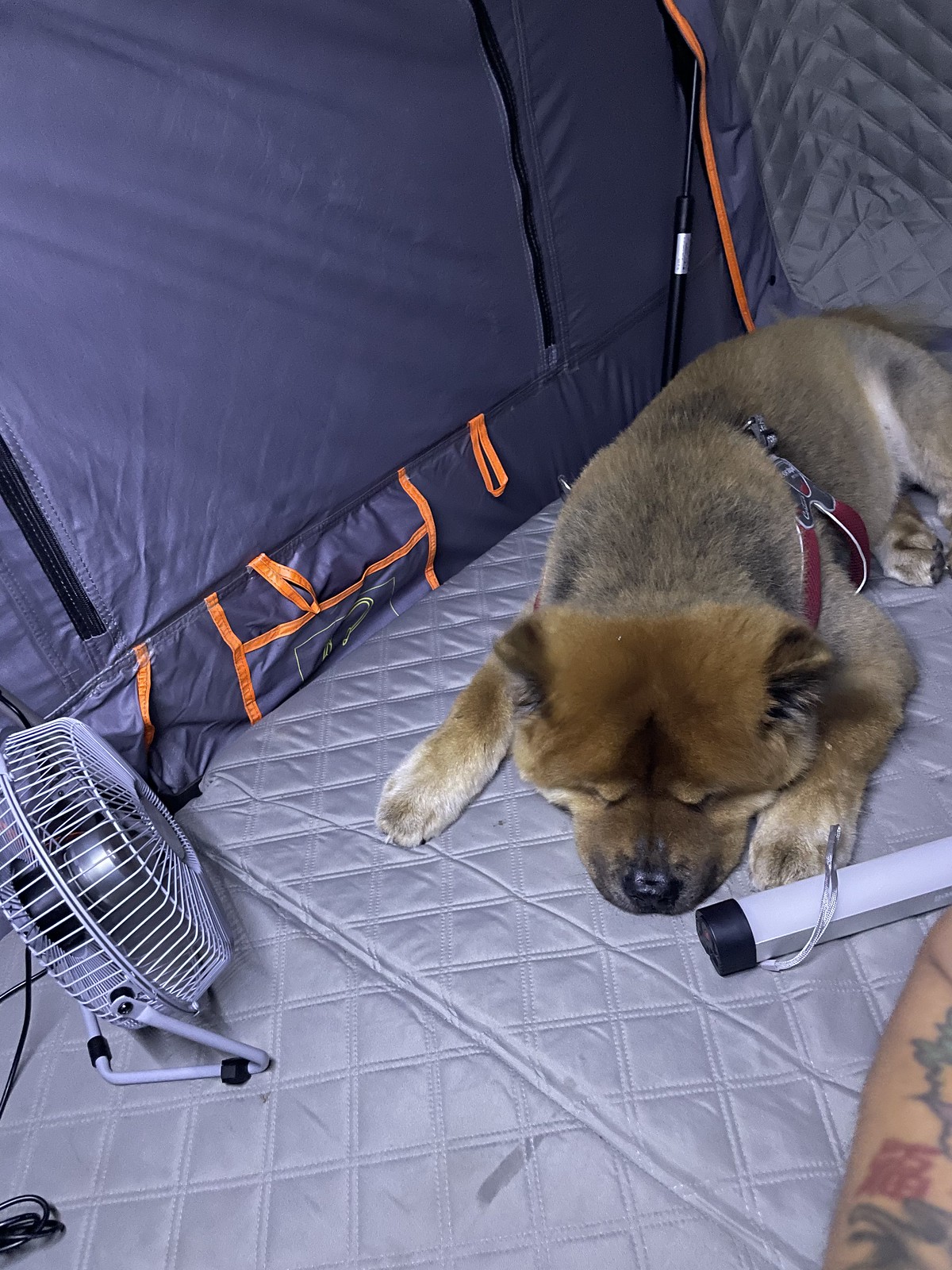 Thankfully the forest is cooler then in the city, and Lambo slept comfortable in the summer night. I love camping, and just being out in nature. Different vibes then the city. I woke up to the sunrise and I noticed it was 530am according to my watch. I was caught off guard thinking my watch was off, but the sun rises in the east first, and makes sense since I’m driving East. 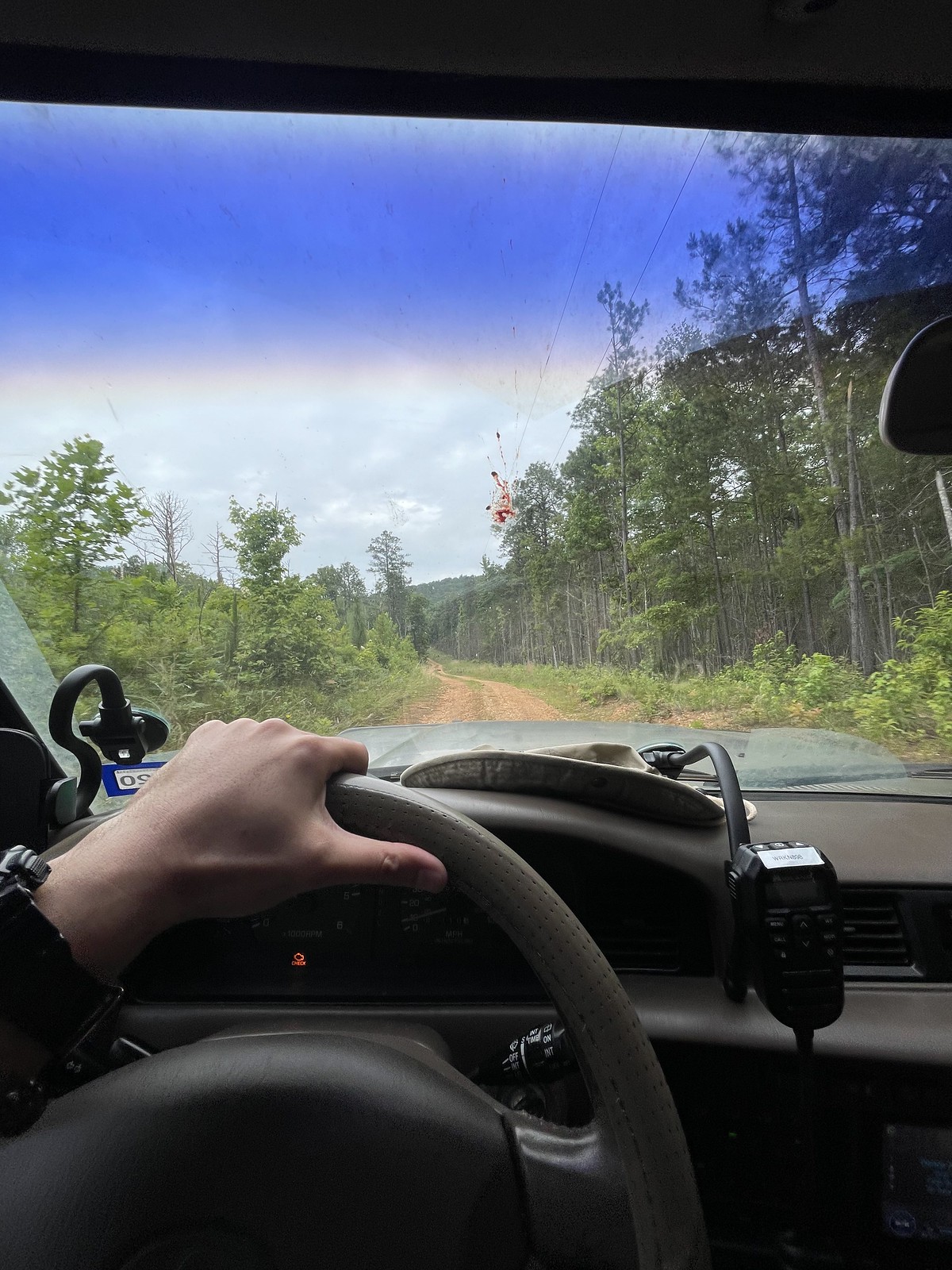 I had a quick instant raman breakfast with some coffee. I walked Lambo around the campsite and soaked in the experience. The views was very similar to Sam Houston National Forest, just more hilly. After my morning routine, I packed up and headed to North Carolina. On the drive there it seemed like I caught up to the Texas rains of last week. Once I passed Georgia, it just rained non-stop to North Carolina. 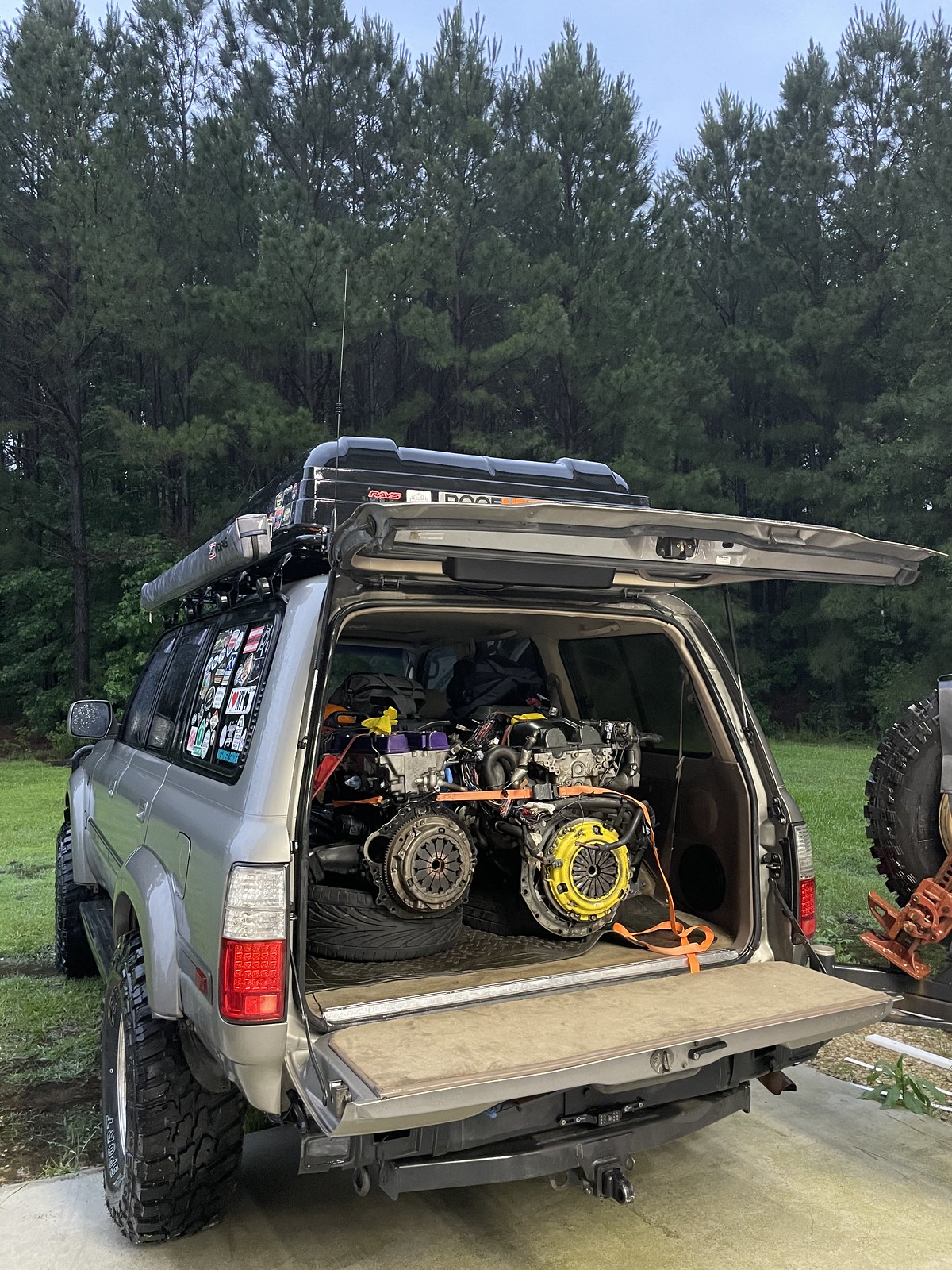 I arrived at Ricks house, and picked an additional motor and transmission for a local Texan. I didn’t mind the additional load since I was getting paid for the gas. Whats really impressive is the Land Cruiser capability. I have my camping gear, food, and clothes on the start of the trip. Now I have two motors and a transmission stuffed inside too! I nice bonus of being an SUV is the motors and transmission are keep clean away from the outdoor elements.

Ricky bought some east coast BBQ for me to try. I love BBQ, and it’s great to see and taste a different style BBQ. I had the pulled pork sandwhich that was complimented with mac and cheese, coleslaw and sweet tea. Very tasty and the sauce is thin and vinegary compared to Texas BBQ. This BBQ style reminded of Cebu lechon in the Philippines. After eating and chilling for a bit, I headed out to the next campsite which was a man made beach. 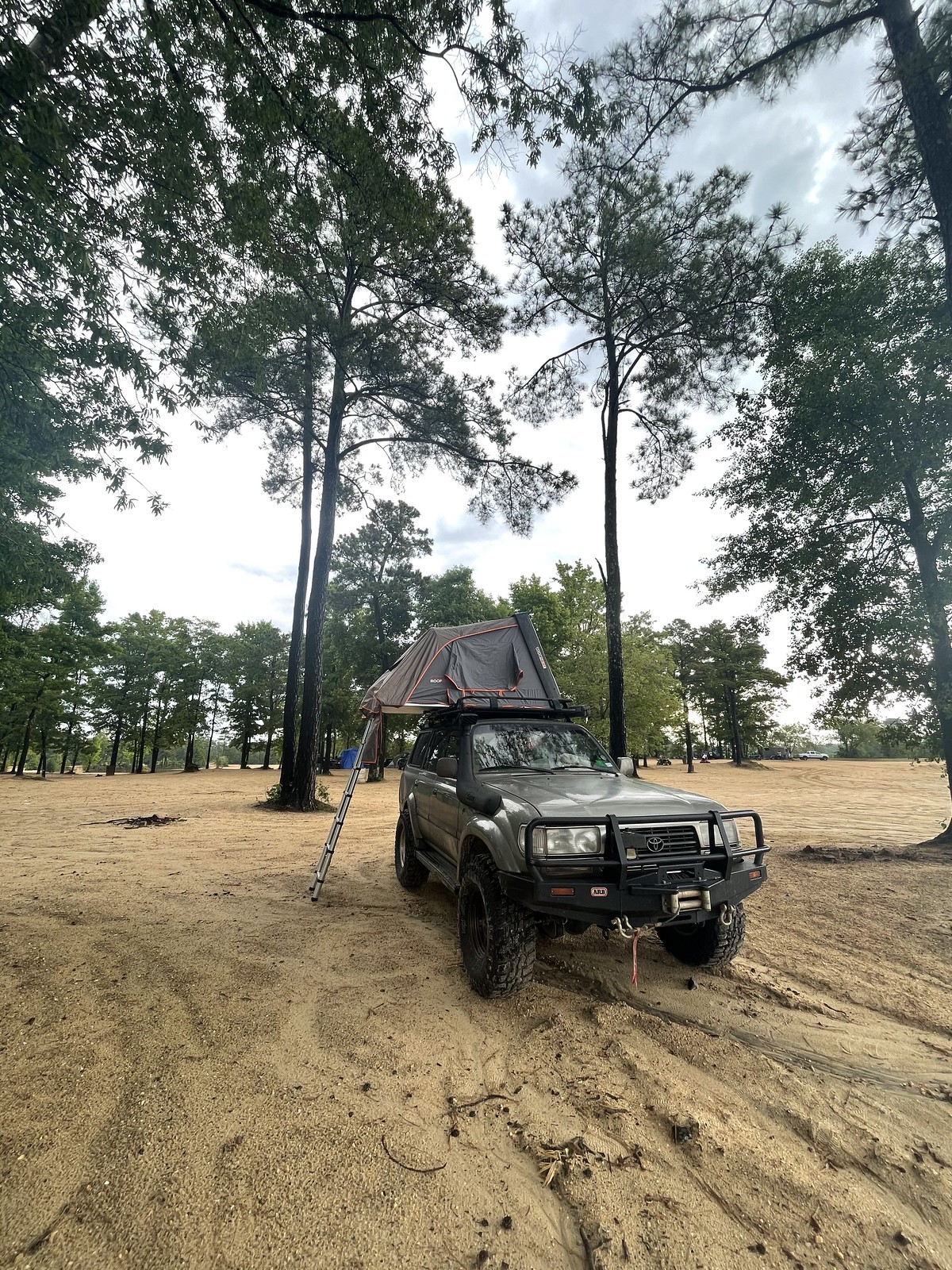 It was still raining, and dark when I got to the trail. The Land Cruiser has stock lighting, which is okay in adverse weather, but some areas was hard to determine the terrain. I took it carefully and I didn’t get stuck. With the future forecast calling for more rain in the morning, I didn’t want to pop tent and dry it out later. With the Land Cruiser stuffed, I had no choice, but to sleep sitting in the drivers seat. It wasn’t good at all. I was sleeping upright, and kept dosing on and off every hour. Felt like I was on a Spirit airline flight, and I just couldn’t get comfortable. I said, screw it, I need to pop my tent up so i can get a good night sleep for the long drive ahead. If it rains more I’ll just deal with it. 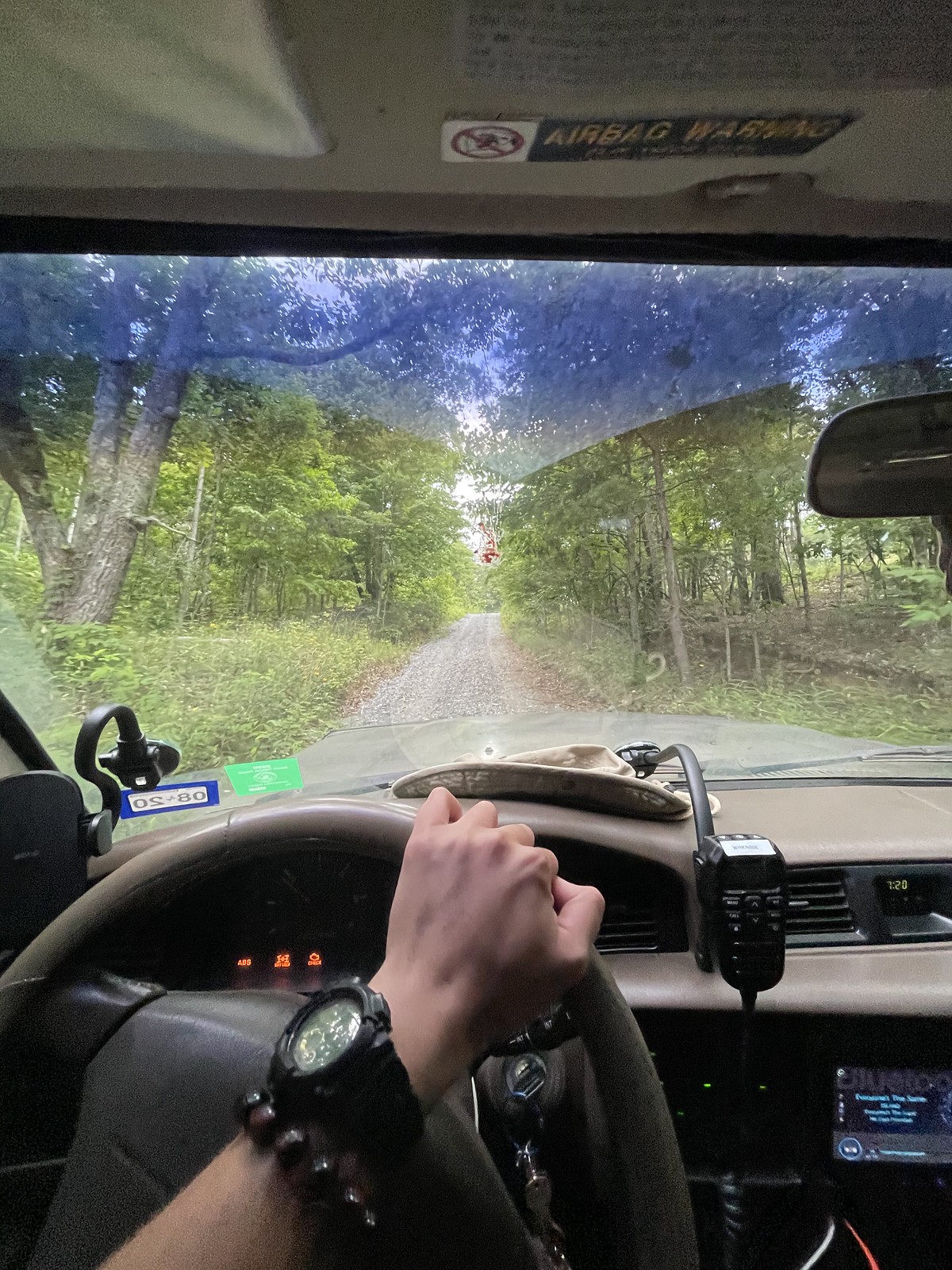 The next day, I woke fully rested and comfortable. Worth it.  I wanted to get a head start on my drive. I made instant coffee as my morning breakfast and got food food at a local donut shop. My friend, Deba, recently moved to Atlanta with his girlfriend, and offered me a place to stay overnight. 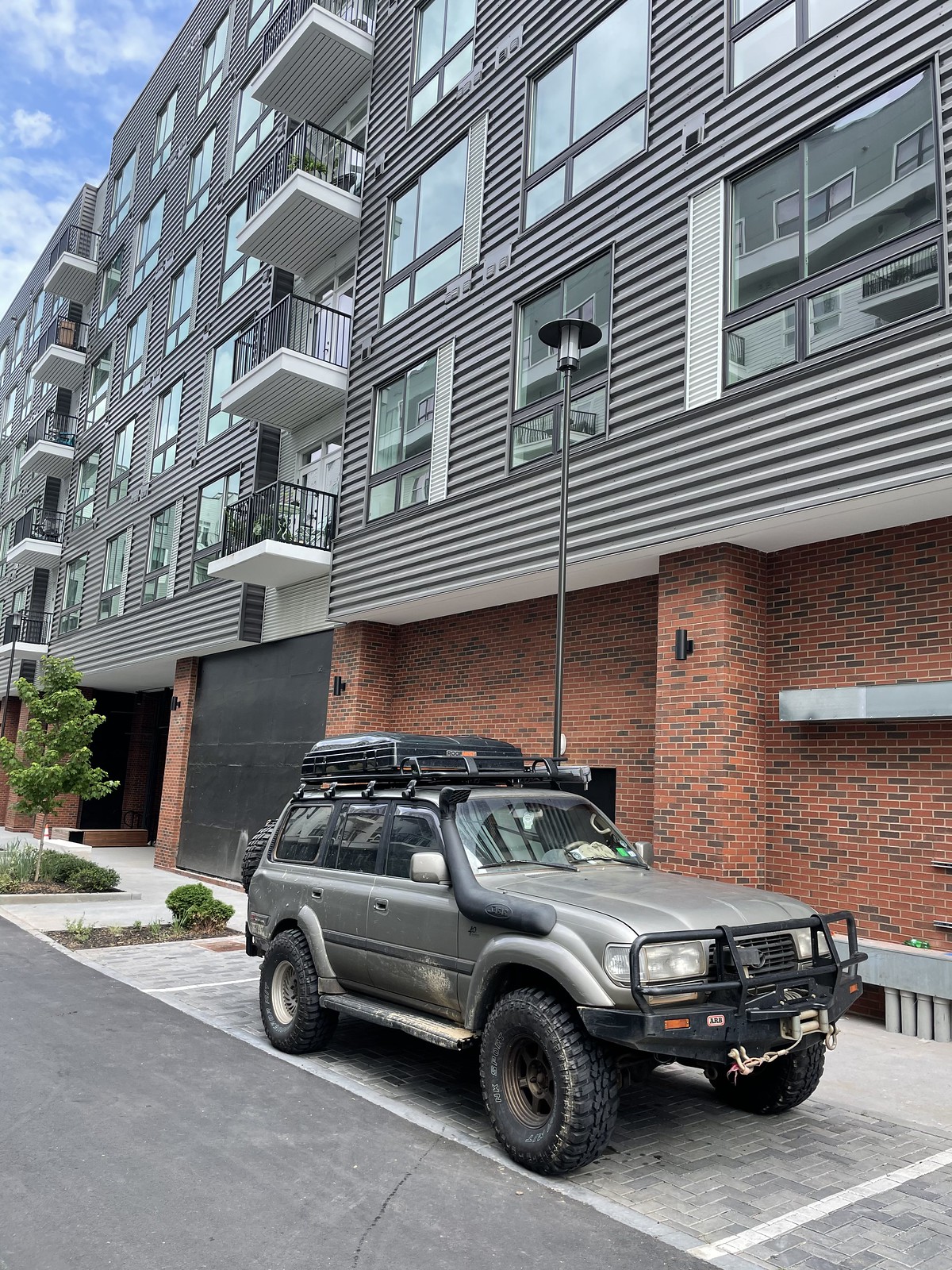 I’m driving to Atlanta, and it’s now day 3. I was looking forward to a good shower. On long camping trips, I think it’s good every 3 days to shower, re up on supplies and do laundry. This is a 4 day trip, and I just need to do the shower part. Atlanta is a beautiful city, and the southern feeling here is more calm and laid back then the Houston mad max vibe. I was in the deep south. We ate out, and had some drinks before calling it a night. Deba used to live in Houston, and we would wrench on his car in my garage. He was another track rat and good memories. Nice good to catch up!

The next day I left Atlanta early because its a 12 hr drive back to Texas. My wife wasn’t able to attend the trip and wanted to spend the extra days off with her. We both love to camp and knowing you could be spending time with someone you love doing the same thing is kinda a bummer. Regardless I still had a great time and made it back home! I did a solo trip and Lambo was a great companion to have. He is loyal dog that knows when to guard and be chill. Lambo love being outdoors and would go out whenever we have the chance. 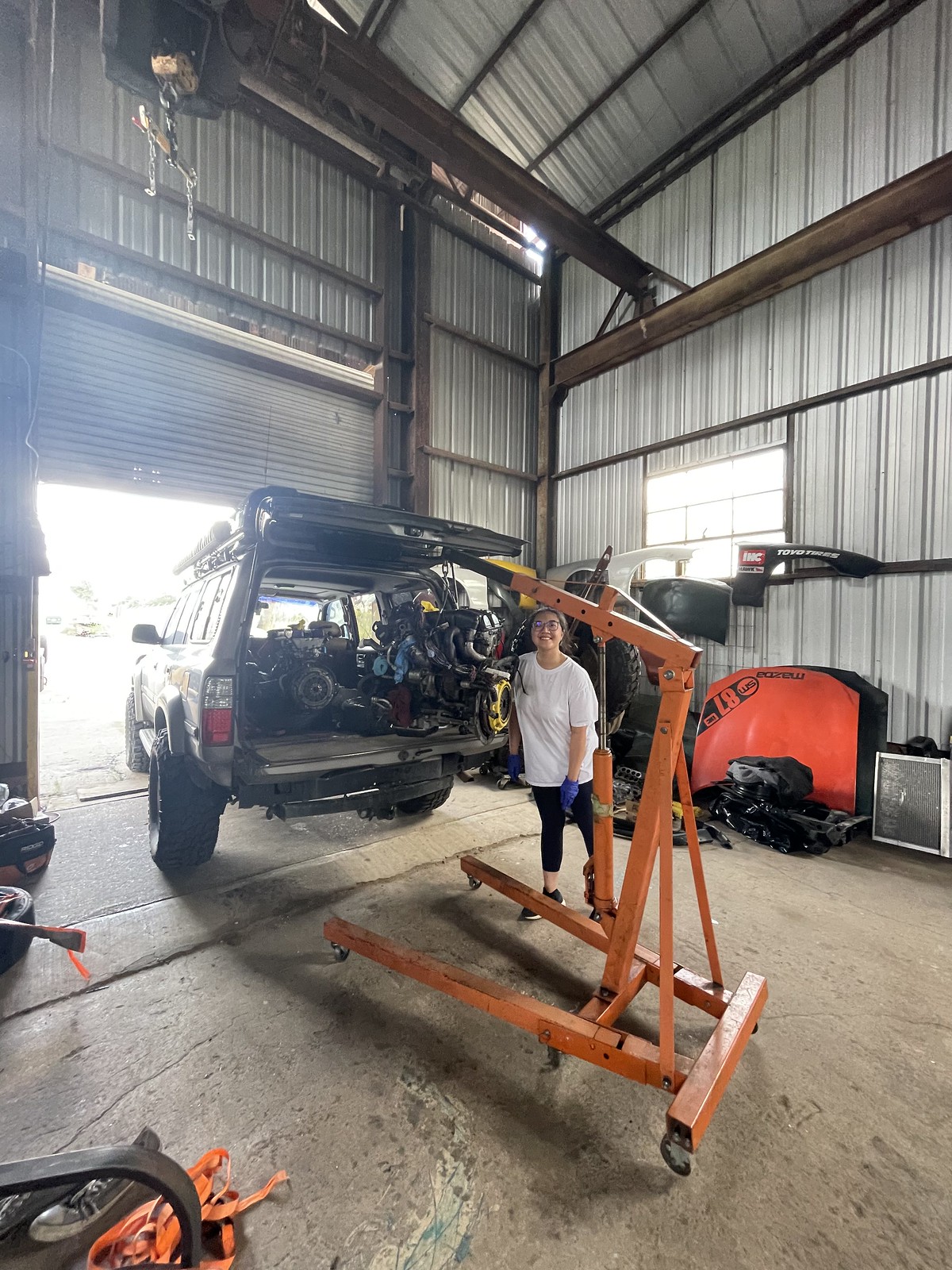 Next on the list is to get my AE86 ready for my race in July. Stay tuned!