This was NASA Texas first time to host a track event at Circuit of the Americas (COTA), and I was excited! I haven’t tracked there in almost 2 years. In matter of fact my very first track day was at COTA. I wasn’t looking forward to the Texas heat and humidity though. May isn’t the hottest month in Texas but its the start of the summer heat. The forecast called for a high of 91 degrees with cloudy skies but sure felt more like 110 with humidity. I was sweating just walking, and sure wasn’t going to easy for the cars either. 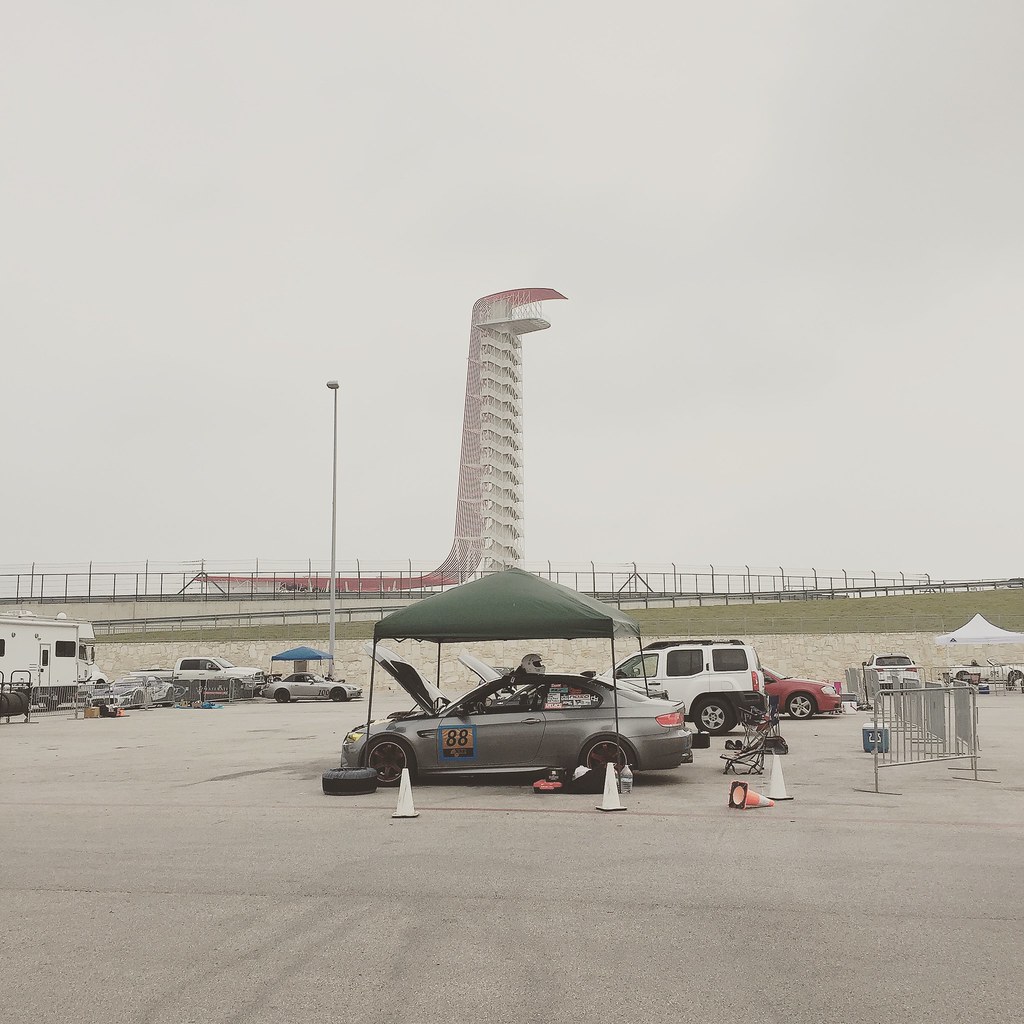 I started to regret not renting a garage on my drive to COTA but thankfully Michael had a canopy I could borrow…. Which later got blown away latter in the day and ended up scratching a FRS. It wasn’t anybody’s fault, and accidents happen. I felt sorry for what happened but at least it didn’t get blown into the track or grid area. 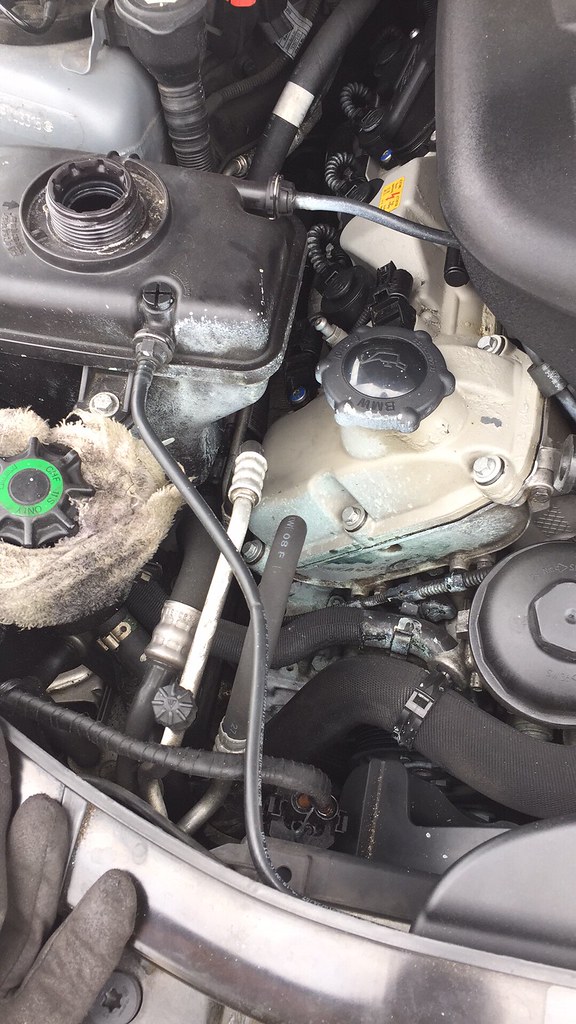 But that was the least of my worries. On the first day, I was giving my friend a ride along when I had a low coolant light pop up. The car didn’t go into limp mode or had a overheating warning. The car seem to be running strong but I did cut my session short becuase of the low coolant warning. Totally bummed I pulled into the pits to check out what happened. I could really smell something sweetish when I was parking, and my friend said its probably coolant. Opening up the hood, it looked like coolant sprayed everywhere in the engine bay. I was bummed at this point becuase it was the first session of the day. I was thinking maybe a hose fitting was loose but I wasn’t sure. Being stubborn I topped of the M3 with distilled water and continued my sessions for rest of the day. Each session I would get the low coolant warning but no other hiccups. I always pulled in early but I least had some seat time. Looking back now it wasn’t the best choice but thankful nothing worse happened. The next day got the low coolant light driving back to COTA from my parent house, which they still live in Austin. I got worried again because I put roughly 3 gallons of distilled water already! I know it just sprays everywhere but its not a good thing. When I arrived at track, there was a guy that saw me on the side of the road earlier and was wondering what happen. I did tell him my situation and pointed me to the right direction. 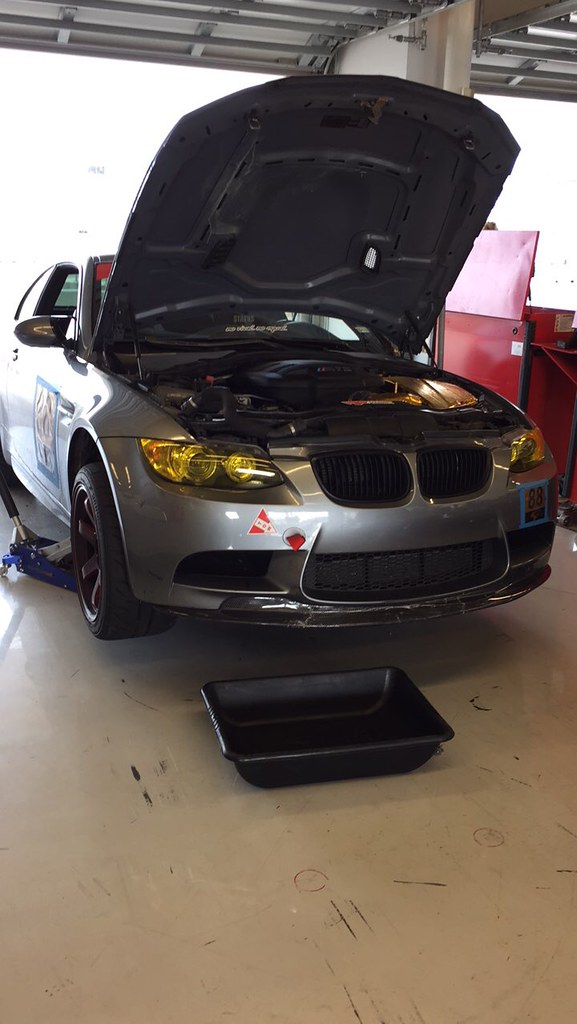 I first went to the tech inspection area to see if my problem could be fixed or I might not be able track. Worst case was not to track the car and just ride as a passenger. The tech guys was very nice but they couldn’t fix the problem but did tell me there was some race teams that had BMWs and they might be able to help me out. I first went to Texas Track Works and they had a bunch of BMWs for the race classes but they only have e46 BMWs. So the next garage was Greg Smith Racing whom I had met before had E92 M3 for time trials. They didn’t bring their E92 M3 for this track weekend but I was hoping they might have E92 M3 parts. Luckily Greg and his team was able to help me out! They first pressurized the cooling system to see if there was a leak. Sure enough the lower radiator hose was spraying! The great thing about a race team is they always have spare parts becuase you just never know. 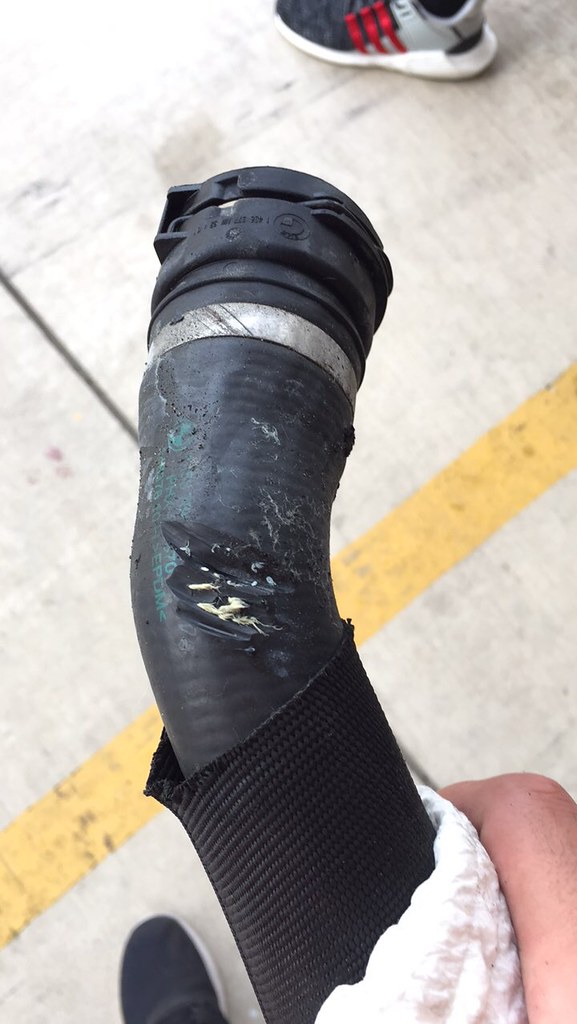 The culprit. You can see the cut marks on the hose when it was rubbing against the AC pulley. There are two rubber grommets that hold the radiator in place and one of the rubber grommet came lose. Running on certain curbs at COTA is harsh on the car and can loosen things. This made the radiator slide back into the engine causing the lower radiator hose to rub against the AC pulley and eventually the cutting the hose. Thank goodness it was just that and not a blown head gasket. The guys uses a different coolant mixture then OEM becuase in a race you want you car run cool as possible. They used a mixture of Water Wetter and distilled water. I don’t really need anti-freeze in Texas except in the one month that is actually does freeze. I’ll make sure to add antifreeze before that happens. 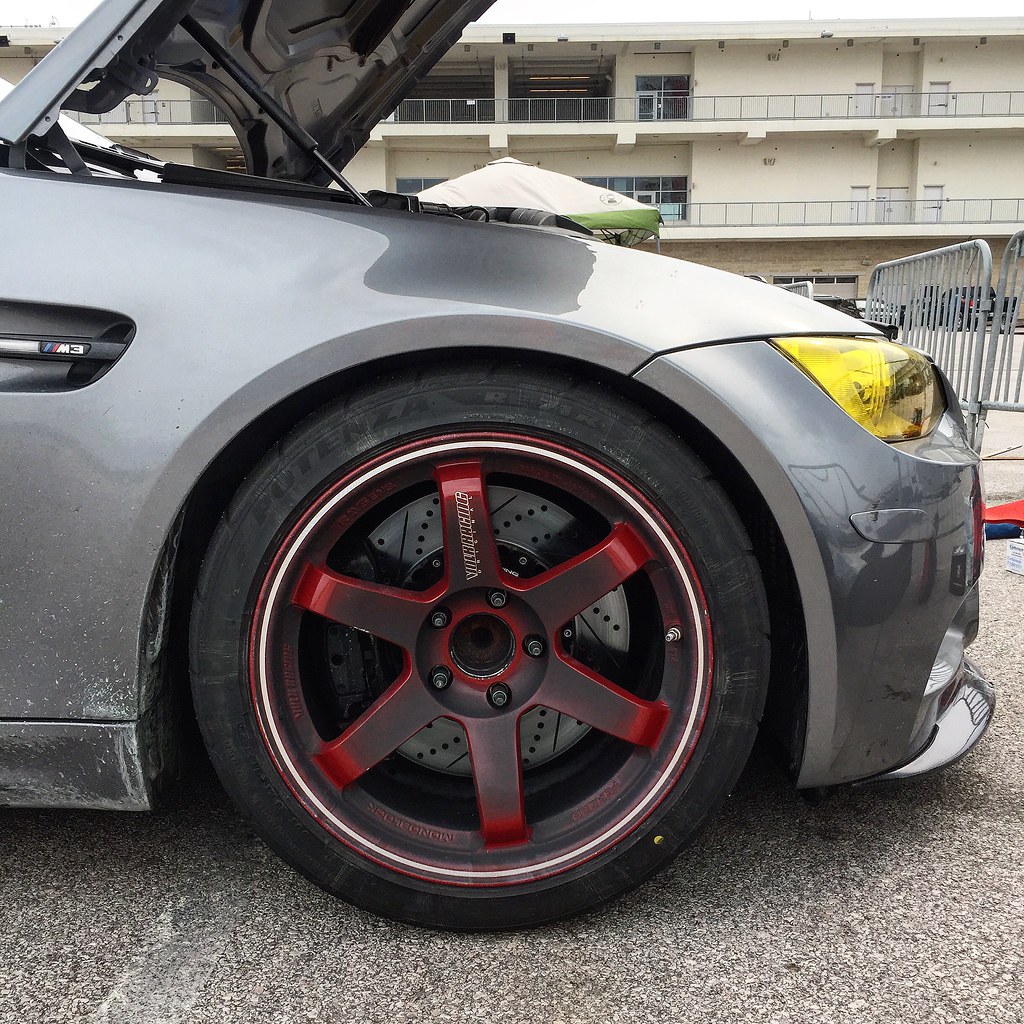 I did miss my first session of the 2nd day becuase we were fixing the M3, but the rest of the day it ran like a champ with no issues!!! I got ride checked to DE4 and I was able to get a faster top speed at the back straight of 150mph! I just want to thank Greg Smith Racing again for helping me out at the track and being able to fix my car so I can track again. The nice thing about the tracking community is people are willing to help you out!